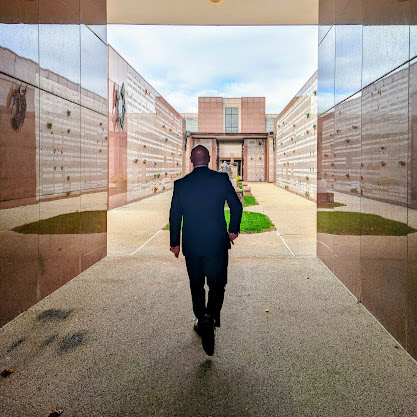 Listen to Me Now: When Words Collide

At this exact moment, I wanted to climb back into the hole from whence I came.

For months, as an apprentice funeral director, I was learning how to meet with grieving families. It was my final hurdle. As an apprentice, you are what your title says you are. You do a lot of the grunt work. You are "on-call" a lot more than licensed directors. You are learning every little nuance that funeral service has to offer. You are being groomed. Trained. Learning. Executing. Practicing. Listening. Taking notes.

Sitting in on funeral arrangements and learning how to talk to families is one of the most important lessons you learn as an apprentice.

It's also the hardest lesson to learn.

Once you are officially a licensed funeral director, you can begin meeting with families on your own. You can go on death calls by yourself. You can take phone calls and sign off on legal documents. You can go over pricing information with shoppers. You can do everything an apprentice cannot. It's the big time. What you say is being listened to intently. By everyone. Your boss. Your families. Your church associates. Your cemetery personnel.

I would learn this the hard way. Sometimes, that's the only way.

My first-ever arrangement as a licensed director was going well.

My funeral home boss (owner) was sitting in the back, in the corner, merely listening to what I was saying and how I was coming across. He wasn't going to interrupt or say anything unless I asked for his help and/or said something wrong. I almost made it through. I was scared. I was nervous. I was shaking inside. Here I was, a grown man, talking to a family about their loved one's funeral, for the first time in my life. I was nearing the end when the family had decided they wanted me to write the obituary and not themselves. No problem, I can type one up with them in no time.

As I was typing away on my computer, I leaned over to each family member asking for the spelling of their name for listing survivors. I also asked a lady the name of her husband. What followed was a lesson I had to learn only once.

GULP. I think I'm dead. I just looked a grown woman in the eyes and asked what her husband's name was. You know what happens when you assume, right? I was the ass, indeed. I assumed she was married to a man and found out she was married to a woman. I was mortified by my mistake. I turned bright red, apologized, and asked the spelling of her wife's name. Meanwhile, the owner was in the back just smiling and shaking his head. After the arrangement ended, he turned to me and said, "Well, you won't make that mistake again, will you?" No sir, I will not. And I never have since.

I didn't and I paid the price. This is why we must always choose our words carefully.